Budget: ONE call to action


From ONE CA Organizer Roscoe Mapps:


Both HOUSE and SENATE budgets eliminated our international funding. Even Secratary Gates states International Funding is crucial to helping defend America. Secratary Clinton agreed with him.

There’s an amendment and we need ONE members to call Senators Boxer and Feinstein and leave a message urging them: to sign onto the "Kerry-Lugar Amendment" to fully fund the International Affairs Budget.

Tomorrow is the vote. So Today is the day!

1)Call the Senate Switchboard at, (202) 224-3121, and let them know what state you are calling from and they will connect you to your Senator's Offices.
2)Let the Senate office know your name and address, that you are a member of ONE, and leave a message urging the Senator to sign onto the "Kerry-Lugar Amendment" to fully fund the International Affairs Budget.
3)Please make sure to call both Boxer and Feinsten’s offices.
4) Post a reply on here saying you've called :)
5) Take picture a picture of yourself on the phone - with a ONE shirt or sign if you have one - We’re doing a massive CA blog and pics would be huge! - send it to me: roscoe.mapps@one.org
6) Tell your friends to do the same
7) Change your Facebook Status for 24 hours.


Good Luck!
Posted by Ryan Townsend at 4:50 PM No comments:

It will probably come as no surprise to those of you who know me that Superdrag's Industry Giants, released a little over a week ago, has been in heavy rotation here in the office, in the car and on walks home from work.


What is something of a surprise is that the band has already filmed a very nice video for the brilliantly caustic catharsis that is "Aspartame," a fist-pumping, contrarian rant against the establishment, the military and wickedness in general. I won't try and insert any more overly descriptive words here: I just plain LOVE it. Plus, it has two of the best executed dub breakdowns I've ever heard. Both John Lennon and Bob Marley would be jealous.

If you wanna usurp the power
I'll be ready in a half an hour
Give my life for that
are the devils ever nervous?
do they deserve the death they serve us?
I’m still not certain of that

Actually John Davis has long been one of my favorite songwriters for knowing his way around a tune and for being willing to indulge in the most blatant of pop cliches while at the same time harboring an affection for the minor key and weird. Usually his lyrics are not the primary reason I love the songs (see "Sold You an Alibi" and almost every track from Head Trip in Every Key) but Industry Giants contains Davis' best and most insightful lyrics to date. Plus, the music, is muscular, thoughtful and full of existential angst. There's real conviction in Davis' voice. Superdrag's music is the perfect soundtrack for a world slightly past the sell-by date.

A world in need of God. A world that needs songs like "Aspartame" on the radio.
Posted by Ryan Townsend at 2:44 PM 4 comments:

Although I was deeply disappointed in the band's major label debut, Singularity, I still have a special place in my heart for the band Mae. In fact, I still listen to The Everglow whenever I feel the need for a little comfort in the midst of post-modern urban alienation.

The band has bounced back from being bounced (or did they ask out of contract? it's all the same these days any way) from Capitol, with a fantastic idea. Record 12 songs in 12 months and donate all of the proceeds to a charity created by the band partnered up with Habitat for Humanity. The resulting three songs have all been interesting, lush, slightly orchestral compositions. March's entry "A Melody, The Memory" is my favorite song so far. Both familiar and new, the song's subject matter deals with the way music provides a soundtrack for those moments, you know the one's I'm taking about. So, what are you waiting for? The band has already raised over $24,000 for the various projects. It's certainly a big idea, some would say naive ... to which I say "way to dream out loud!"

[January - April] This is the season to focus on youth and help instill appreciation for music and the arts. Music is the world's language. It has the ability to bridge nations and to connect people. We have been changed by the power of music. That is a gift we want to share. Art goes hand in hand with music as a powerful voice of expression. Art shows us the world from the people's point of view. Art is the vessel of the human experience and it is a powerful weapon in the hands of truth. This is also the time to focus on education. Learning is what opens the doors to a better future. What aspects of the education system need our help? How do we educate ourselves to face the world's problems as they become ours to solve? These are the issues of Morning:


We have asked you to write the story. Here is how you do that. We are giving ALL of the profits from the sale of our digital downloads to projects that we choose together with you. Think about the specific things you feel passionate about changing in the world. Since the first part of the year is dedicated to music, art and education, we are asking you to think about how we can work together to fix things that are broken. We do not just want to throw money at something. We want to create a door for involvement. Lets talk. What can we do together to make education better? What do you like and dislike about your education? What about school music and art programs? Do you know any amazing teachers that are trying things that live outside of the box? Tell this community about them and lets make sure that we shine a light on the people that are doing it right.
We are thinking about working with an organization called Destination Imagination. Have any of you ever worked with them before? What was that experience like? Check out the link and lets get our hands dirty.
http://www.idodi.org/"

Posted by Ryan Townsend at 8:51 AM No comments: 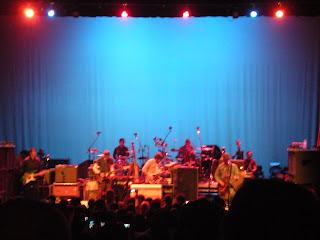 During intense times of really sorting it out, I am not a terribly effective blogger, either that, or a new baby boy keeps me from indie rock musings. Likely some of both.

Last month's Modest Mouse show in Visalia was enjoyable, managed to snap a picture or two and hear 12 of 18 songs before heading back to fresno before Micah turned into a pumpkin at midnight. Especially notable was my favorite mm tune, "trailer trash." everyone in the fox nodded along and isaac brock guitar heroed his way through some classics despite the occassional feedback and sound issues. slightly bummed to have to leave early but you know, parenthood is a sacrifice...

Posted by Ryan Townsend at 10:41 PM No comments: