In an alternate reality, CUSH is the probably the biggest band in the world. In this one, they made one brilliant album and played a few brilliant concerts...one of which I was so fortunate to see at the Glass House in Pomona, California. My friends Matthew Powell and Justin Landis accompanied my now-wife and I to that Violet Burning/Cush double bill. From what I understand, there may be another CUSH full length at some point, but it seems that Michael Knott, will sadly, never play with the band again. Therefore, as good as the Prayer Chain instrumentalists are, they are only half as good without the juggernaut that is Mr. Mike Knott.

Below is a great version of "Crush Me" from their self-titled record and a messy, crazed version of Knott's own "Cool"/"Thru" medley. Prickett gets down on this one.

Here's to hope in things that will never be.

My friend, Keith Giles, wrote this in the Subversive Underground, in an article about the recent Evangelical Manifesto. The best thing about Keith, is that he really walks out what he talks. The guy pastors a church called The Mission, doesn't take a salary and every cent they collect (from tithes and offerings) goes to the poor.They don't even use it to buy paper goods or snacks.

"The reason why Christianity in America is toxic to most people is that those who are called to be representatives of Jesus have done a terrible job. This is why I cannot bring myself to be indentified as a "Christian" to someone outside the Church. They hear that term and they equate me with the big-haired, money-hungry, gay-bashing, waiting-for-the-rapture brand of Believer. That is not who I am. That is not the Jesus I follow."
Posted by Ryan Townsend at 10:01 PM 1 comment:

At lunch yesterday with my friend Dave W. (see his brilliant, lightning-quick insights ) a conversation about his blog, holy heteroclite (not to be confused with a french clothing company), led me to the startling realization that I need to link to more stuff in my blog to raise my profile on google.

Granted, this blog already shows up as fourth or fifth on the list for "Ryan Townsend" sometimes higher but typically below my Canadian and British doppelgangers.

At Northpark, we're gearing up for the big change. At the Grind, they're playing the one and only Postal Service record. I just finished The Nightly News by Jonathan Hickman, a nasty little graphic novel about a cult who murder journalists because the media is an agent of government control. Definitely not a feel-good story but thought-provoking and entertaining. Check out Hickman's blog, Pronea.

My new column debuted in the Bohemian Alien this past week... I am grateful to be included among the manyv great artists over there, so check it out if you have a chance. More on the Alien to come...

And finally, I was sitting here and realized that I MUST immediately listen to the song, "Got a Feeling" by the fantastic and criminally underrated, Ivy. Is there a youtube video for it? Yes, yes there is.

sweetheart, you're so cruel 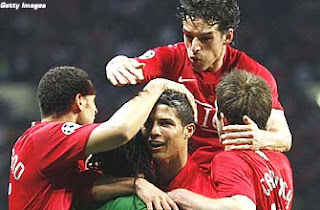 Man United win 6-5 on penalties, in the pouring rain after midnight in Moscow. Poor John Terry missed for Chelsea with a chance to win it after Ronaldo missed. I just knew Anelka was going to go left and Van D knew it too. Very thrilling...Chelsea fans must be totally disappointed.

I am even a little bummed.
Posted by Ryan Townsend at 2:41 PM No comments:

I just got back from lunch with my friend Dave, to discover that the CL Final between Manchester United and Chelsea had gone to extra time... I was recording it old school style on VHS but now I can watch the end live on espn 360.

Now it's going to penalties in my one-time hometown of Moscow.

Crazy exciting, maybe unjust but fun for this Tottenham supporter, I suppose I want Chelsea to win because they are the underdogs.
Posted by Ryan Townsend at 2:24 PM No comments:

the overdubs in the bee

Mike Oz of the Fresno Bee was so kind as to interview us (me) for last Friday's edition of the 7 Section. You can check it out online here...
the overdubs, artists you should know

in other news, I'm going on vacation tomorrow but I hope to use some of my time off to continue the cover songs podcast series. friday's show at the Joe was top notch. stay tuned for more shows. if you want us to play at something, drop us a line.

happy end of the weekending,

Ryan
Posted by Ryan Townsend at 9:45 PM No comments:

This morning, as I peddled my bike faster than usual on my way to a day at the office that promises to be busier/more hectic than usual, I felt that peculiar sense of place and time that can descend when one hears the perfect song at the perfect time. For me that song was "Bixby Canoyon Bridge" by Death Cab for Cutie from their new record Narrow Stairs (out next week 5/13). It's been a tense week for me, getting ready to go on vacation, doing an interview for the paper, practicing for Friday's show, writing a column for the bohemian-alien, designing banners and cards, putting together a Mission Team for June's launch, and hopefully finishing a term paper before class this afternoon. That tension is nicely reflected in the song, which opens as melodic, beautiful, and sad as any song the band has done before and then eventually lurches towards a noisy, chaotic climax that is still pretty darn hum-able. Kind of like life these days.
Tomorrow's the big return to Kuppajoe. We're supposed to go on at 9:45 or 10:00 but if you can come out early to check out the other bands, Amoeba Defense and Kinship. I'm stoked to see both of them so you better believe I'll be there early. Here's the flyer I did for the show. No time for links but you can find stuff if you look hard. 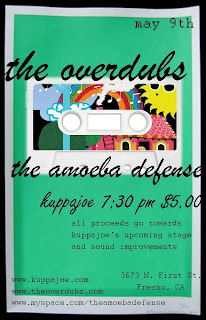 Posted by Ryan Townsend at 10:53 AM No comments:

the future, the present, the bike trailer and the polyphonic spree, 100 posts later

Today was a excellent day off, except that we went to Wal Mart to get the oil changed on the 'Nox. But even that wasn't so bad because Amelia fell asleep in my arms while we browsed the garden section. While we're on the subject of Wal Mart, has any one else been there lately? I only go maybe three times a year if I can help it but today it seemed as though no one was working...only a few people in uniform trying to run this big, gigantic store? I will say this, the guys in the auto section were extremely friendly and helpful and so the money we save didn't come at too high a price. They also were surprisingly not overworked, my dad mentioned that oil changes might be the first things put off during a recession.
We got the bike trailer hooked up that Justin and Jen gave us today and rode over to the church so Bekah could help set up for a MOPS yard sale and then we had date night so we rode home, ate some Burger King that Larry gave us and now Bekah's gardening and I'm hoping the Giants will hang on to thie 5-4 lead in the 10th.
Also, today I stumbled onto the latest Polyphonic Spree record, The Fragile Army, in my itunes library, I love it when that happens. You completely forget that you have an album that you maybe listened to three songs of and suddenly, it grips you and won't let go.

I saw Tim DeLaughter (when he and fellow Spree members Mark Pirro and Bryan Wakeland were in the band Tripping Daisy) play at the Juke Joint in Springfield, MO way back in 1998 and loved their then-evolving-past-grunge-into-something-much-more-pop show. The next year, guitarist Wes Bergen died, leading to the band's demise. It's taken me a while to warm up the Spree's sprawling 23-member lineup, it initially seemed too gimmicky. However, I love the latest record and the video above, tugs at the heart strings for those of us who consider ourselves people predominantly concerned with parenting, working, who also happen to still want to play some rock music with friends. "we're better together" **
In other news, this is my 100th post. Also, the Giants managed to lose in the bottom of the 10th on a two run homer by Burrell. Also, every Christian worship ad that comes out on Fox Soccer Channel is even more embarrassing than the last.
Posted by Ryan Townsend at 7:21 PM 2 comments: